Looked at the pics on Twitter from the #Londonroar, looks very impressive, electrifying and totally different to what we’ve experienced so far.

No wonder the Aquatics Centre looks sold out, when normally it is very difficult to fill the seats, with exception of very major events from British Swimming of course.

The atmosphere is priceless, no wonder so many officials wanted to work there completely free without the usual travel expenses. All those normal competitions, and then this, must be worth it.

The normal age-group competitions in comparison look boring and are kept alive only by the will of the young people to swim as fast as they can and by the parents who want to see their youngsters do well.

Madison is doing her GCSE this and next year and helps as coach over the weekend, so helping our younger swimmers comes first. I think it is very commendable that Madison works hard at school every day – and has some excellent grades – and then helps over the weekend at the club.

Well, she is starting to train again and surprised how hard it has become to keep up with the fast swimmers after over 1 year of break.

I am nursing a sore leg, it has been playing up, off and on over the years but now I am also having a sore foot and wait for medical treatment.

Once a swimmer always a swimmer. Madison’s transformation from swimmer to coach is complete. Coaching makes it easier to sincerely appreciate the years of team training in the pools of East London.

It came naturally, with the shoulder injury that the emphasis of pool work shifted towards coaching in last year. So nothing is lost to the sport, one can transform knowledge in the pool to teaching.

I fondly remember the stages of development.

There is a lot of understanding how swimming works experienced first hand that can be translated into coaching.

Madison started to help around the pool 2 years ago and now has a permanent slot on the coaching team.

I get this lovely and warm feeling when I did a swim on the way home. Even in autumn and winter it seems warm outside, for a time at least.

I don’t even look sporty but after years of officiating at swimming meets and helping a performance swimmer into the sport, the least I can do is keep fit myself.

I swim at least 1500 meters each time I get into the pool and hopefully more soon. I am 67 this year and a pensioner who doesn’t cost the NHS much money as I do my utmost to keep myself healthy.

My biggest dream at the moment is to get Secondary Schools in London more involved with swimming as a sport. Having gone back into school governance, I hope to have a healthy influence on schools in the area. I am particularly interested to get state schools involved into swimming.

Madison is now coaching for Hackney Aquatics and between us we can do our bit to help children to swim and give others motivation too. Madison loves to show young swimmers the basics of skilled swimming.

I am also a great friend of walking and have posted many times about our excursion. with my regular walking group I undertake weekly walks through the Greater London area, which is also a nice keep-fit activity.

Even better is that I probably can officiate as I just love officiating for competitions at the London Aquatics Centre, which has become my second home.

Calling it the London roar is very appropriate as Adam Peaty swims there and he is a big lion fan. It wouldn’t surprise me if Adam asked the organisers to name the competition London Roar.

As I’ve learned British Swimming will also recruit the officials for this, something I didn’t think would be possible. Announcements will be short notice but people are alerted to stand by.  The big event will be 23. and 24. November 2019.

It’s just great that Melanie Marshall, Adam Peaty’s coach is head coach, so everything is just like normal.

Passing on knowledge, passing on the feeling for the sport. Sir John Whitmore is a British racing driver, not a swimmer but the knowledge is the same for all the sports. Sir John thinks it is more imporant to set actionable goals rather than just to give advice.

Madison knows very well which goals can be managed and how swimmers feel at various stages of their career and is very popular with the younger swimmers. It is important that swimmers like their coach. 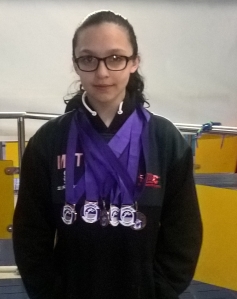 When Madison was still competing she was a trendsetter in the local clubs and won many medals at local meets.

As the more senior swimmers train with Rick, who is of course the bee’s knees of coaching, there are now some goals becoming apparent as the club in a first of its short history has achieved 3 relay and medley relay races entries.

Considering that not all members of the relay teams have achieved single entries for the British Summer champs 2019, it is quite remarkable that this young club – Hackney Aquatics – has now achieved entries into the British nationals for the first time in all three male team events.

Since Madison cannot train or compete at the moment it is very important that she can pass on her knowledge to younger swimmers and help them set goals as she has been through the stages of development.

The atmosphere in East London clubs is changing for the better and we give each other strength and encouragement.

Madison is now waiting for another appointment to see whether her shoulder gets better as the screws that were inserted do not seem to do the trick.

But I might as well help with officiating of the British and English champs this year so we keep the good swimming competition feeling in the centre of our hearts.

Expectations have been destroyed by simply ‘it takes time to heal’.

When we started on the surgical procedures, we thought, that not long afterwards everything will be back to normal but that is not so.

I had to go today and ask for reassurance because it’s hard for an athlete to stay dormant.

Especially as the shoulder still cannot be used, that affects the training routine. Resignation starts to settle in.

But today we have been given new hope. The consultant told me that the shoulder will become functional again once the screws have been removed.

So far Madison still cannot lift her arm higher than 45 degrees and cannot turn the arm around fully. That means still no proper swim training.

But Madison is very keen to stay within swimming as a sport and as a profession. The club is very keen to retain Madison as future coach and whilst the athletic swim training is on hold the voluntary coaching can continue.

One of the biggest shocks a swimmer can experience is when the favourite swimming coach suddenly makes a career move and joins another club.

Unfortunately our very popular and loved coach Richard Beard will be joining Plymouth Leander. The seemingly acceptable consolation about this is that he changes to such a successful club, which makes everybody feel good for him. Yes, Richard is a pretty good coach and only deserves the best swimmers.

That makes a swimmer vulnerable when a permanent coach leaves because there is an emotional bond one forms and suddenly not having that trusted person around will test anybody’s resilience.

Everybody is wondering who’s’ going to replace Richard and it’s one of the biggest surprises we are going to get at the end of the season.

It is a good method to train to become more independent and concentrating on goals rather than people around the pool.